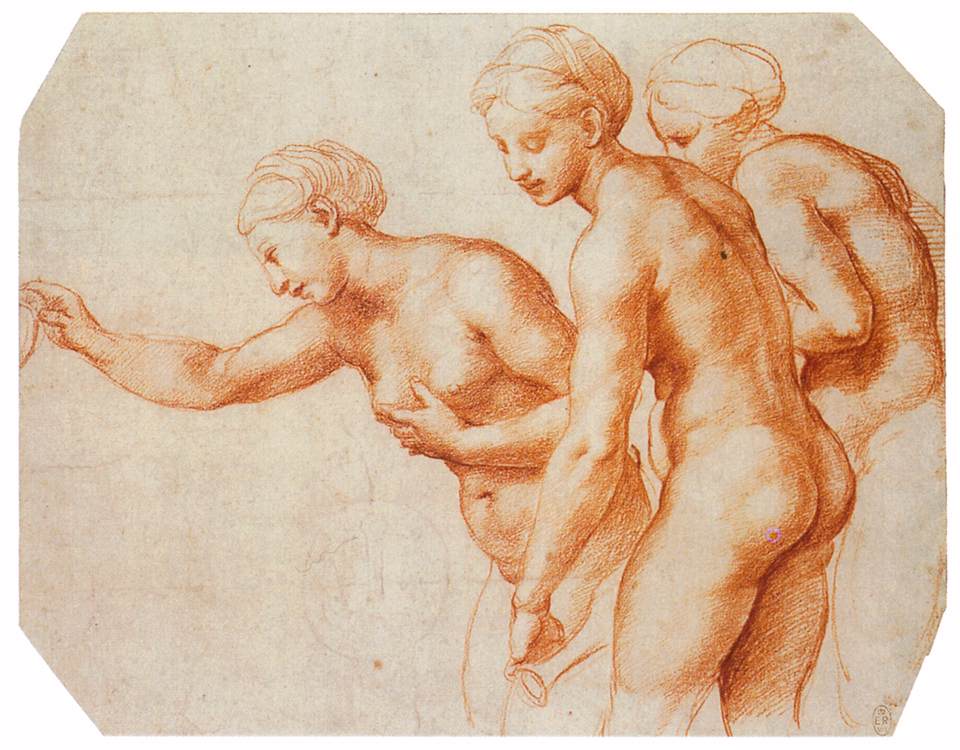 There they are, my fifty men and women
Naming me the fifty poems finished!
Take them, Love, the book and me together;
Where the heart lies, let the brain lie also.

Rafael made a century of sonnets,
Made and wrote them in a certain volume
Dinted with the silver-pointed pencil
Else he only used to draw Madonnas;
These, the world might view–but one, the volume.
Who that one, you ask? Your heart instructs you.
Did she live and love it all her lifetime?
Did she drop, his lady of the sonnets,
Die, and let it drop beside her pillow
Where it lay in place of Rafael’s glory,
Rafael’s cheek so duteous and so loving–
Cheek, the world was wont to hail a painter’s,
Rafael’s cheek, her love had turned a poet’s?

You and I would rather read that volume
(Taken to his beating bosom by it),
Lean and list the bosom-beats of Rafael,
Would we not? than wonder at Madonnas–
Her, San Sisto names, and Her, Foligno,
Her, that visits Florence in a vision,
Her, that’s left with lilies in the Louvre–
Seen by us and all the world in circle.

You and I will never read that volume.
Guido Reni, like his own eye’s apple,
Guarded long the treasure-book and loved it.
Guido Reni dying, all Bologna
Cried, and the world cried too, ‘Ours, the treasure!’
Suddenly, as rare things will, it vanished.

Dante once prepared to paint an angel:
Whom to please? You whisper ‘Beatrice.’
While he mused and traced it and retraced it
(Peradventure with a pen corroded
Still by drops of that hot ink he dipped for,
When, his left-hand i’ the hair o’ the wicked,
Back he held the brow and pricked its stigma,
Bit into the live man’s flesh for parchment,
Loosed him, laughed to see the writing rankle,
Let the wretch go festering through Florence)–
Dante, who loved well because he hated,
Hated wickedness that hinders loving,
Dante, standing, studying his angel,–
In there broke the folk of his Inferno.
Says he–‘Certain people of importance’
(Such he gave his daily dreadful line to)
‘Entered and would seize, forsooth, the poet.’
Says the poet–‘Then I stopped my painting.’

You and I would rather see that angel,
Painted by the tenderness of Dante,
Would we not?–than read a fresh Inferno.

You and I will never see that picture.
While he mused on love and Beatrice,
While he softened o’er his outlined angel,
In they broke, those ‘people of importance’:
We and Bice bear the loss forever.

What of Rafael’s sonnets, Dante’s picture?
This: no artist lives and loves, that longs not
Once, and only once, and for one only,
(Ah, the prize!) to find his love a language
Fit and fair and simple and sufficient–
Using nature that’s an art to others,
Not, this one time, art that’s turned his nature.
Ay, of all the artists living, loving,
None but would forego his proper dowry,–
Does he paint? he fain would write a poem,
Does he write? he fain would paint a picture,–
Put to proof art alien to the artist’s,
Once, and only once, and for one only,
So to be the man and leave the artist,
Gain the man’s joy, miss the artist’s sorrow.

Wherefore? Heaven’s gift takes earth’s abatement!
He who smites the rock and spreads the water,
Bidding drink and live a crowd beneath him,
Even he, the minute makes immortal,
Proves, perchance, but mortal in the minute,
Desecrates, belike, the deed in doing.
While he smites, how can he but remember,
So he smote before, in such a peril,
When they stood and mocked–‘Shall smiting help us?’
When they drank and sneered–‘A stroke is easy!’
When they wiped their mouths and went their journey,
Throwing him for thanks–‘But drought was pleasant.’
Thus old memories mar the actual triumph;
Thus the doing savors of disrelish;
Thus achievement lacks a gracious somewhat;
O’er-importuned brows becloud the mandate,
Carelessness or consciousness–the gesture.
For he bears an ancient wrong about him,
Sees and knows again those phalanxed faces,
Hears, yet one time more, the ‘customed prelude–
‘How shouldst thou, of all men, smite, and save us?’
Guesses what is like to prove the sequel–
‘Egypt’s flesh-pots –nay, the drought was better.’

Oh, the crowd must have emphatic warrant!
Theirs, the Sinai-forhead’s cloven brilliance,
Right-arm’s rod-sweep, tongue’s imperial fiat.
Never dares the man put off the prophet.

Did he love one face from out the thousands,
(Were she Jethro’s daughter, white and wifely,
Were she but the AEthiopian bondslave),
He would envy yon dumb, patient camel,
Keeping a reserve of scanty water
Meant to save his own life in the desert;
Ready in the desert to deliver
(Kneeling down to let his breast be opened)
Hoard and life together for his mistress.

I shall never, in the years remaining,
Paint you pictures, no, nor carve you statues.
Make you music that should all-express me;
So it seems; I stand on my attainment.
This of verse alone, one life allows me;
Verse and nothing else have I to give you;
Other heights in other lives, God willing;
All the gifts from all the heights, your own, Love.

Yet a semblance of resource avails us–
Shade so finely touched, love’s sense must seize it.
Take these lines, look lovingly and nearly,
Lines I write the first time and the last time.
He who works in fresco steals a hair-brush,
Curbs the liberal hand, subservient proudly,
Cramps his spirit, crowds its all in little,
Makes a strange art of an art familiar,
Fills his lady’s missal-marge with flowerets,
He who blows through bronze may breathe through silver,
Fitly serenade a slumbrous princess.
He who writes, may write for once as I do.

Love, you saw me gather men and women,
Live or dead or fashioned by my fancy,
Enter each and all, and use their service,
Speak from every mouth,–the speech, a poem.
Hardly shall I tell my joys and sorrows,
Hopes and fears, belief and disbelieving:
I am mine and yours–the rest be all men’s,
Karshish, Cleon, Norbert, and the fifty.
Let me speak this once in my true person,
Not as Lippo, Roland, or Andrea,
Though the fruit of speech be just this sentence:
Pray you, look on these my men and women,
Take and keep my fifty poems finished;
Where my heart lies, let my brain lie also!
Poor the speech; be how I speak, for all things.

Not but that you know me! Lo, the moon’s self!
Here in London, yonder late in Florence,
Still we find her face, the thrice-transfigured.
Curving on a sky imbrued with color,
Drifted over Fiesole by twilight,
Came she, our new crescent of a hair’s-breadth.
Full she flared it, lamping Samminiato,
Rounder ‘twixt the cypresses and rounder,
Perfect till the nightingales applauded.
Now, a piece of her old self, impoverished,
Hard to greet, she traverses the house-roofs,
Hurries with unhandsome thrift of silver,
Goes dispiritedly, glad to finish.

What, there’s nothing in the moon noteworthy?
Nay: for if that moon could love a mortal,
Use, to charm him (so to fit a fancy),
All her magic (’tis the old sweet mythos),
She would turn a new side to her mortal,
Side unseen of herdsman, huntsman, steersman,–
Blank to Zoroaster on his terrace,
Blind to Galileo on his turret.
Dumb to Homer, dumb to Keats –him, even!
Think, the wonder of the moonstruck mortal–
When she turns round, comes again in heaven,
Opens out anew for worse or better!
Proves she like some portent of an iceberg
Swimming full upon the ship it founders,
Hungry with huge teeth of splintered crystals?
Proves she as the paved work of a sapphire,
Seen by Moses when he climbed the mountain?
Moses, Aaron, Nadab, and Abihu
Climbed and saw the very God, the Highest,
Stand upon the paved work of a sapphire.
Like the bodied heaven in his clearness
Shone the stone, the sapphire of that paved work,
When they ate and drank and saw God also!

What were seen? None knows, none ever will know.
Only this is sure–the sight were other,
Not the moon’s same side, born late in Florence,
Dying now impoverished here in London.
God be thanked, the meanest of his creatures
Boasts two soul-sides, one to face the world with,
One to show a woman when he loves her.

This I say of me, but think of you, Love!
This to you–yourself my moon of poets!
Ah, but that’s the world’s side, there’s the wonder,
Thus they see you, praise you, think they know you!
There, in turn I stand with them and praise you–
Out of my own self, I dare to phrase it.
But the best is when I glide from out them,
Cross a step or two of dubious twilight,
Come out on the other side, the novel
Silent silver lights and darks undreamed of,
Where I hush and bless myself with silence.

Oh, their Rafael of the dear Madonnas,
Oh, their Dante of the dread Inferno,
Wrote one song–and in my brain I sing it,
Drew one angel–borne, see, on my bosom!