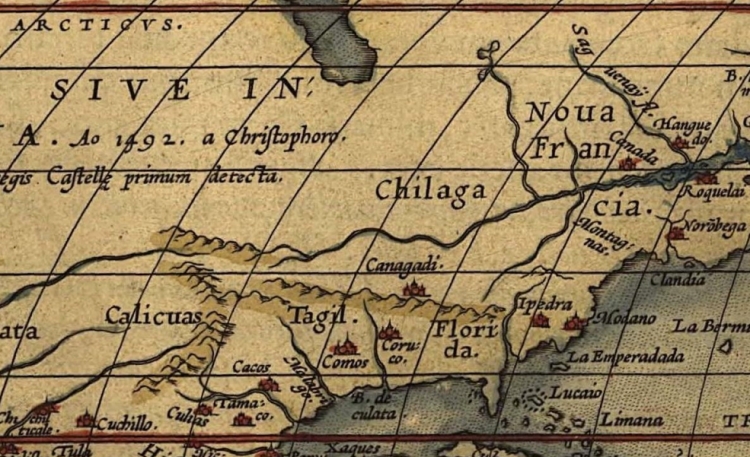 Land lies in water; it is shadowed green.
Shadows, or are they shallows, at its edges
showing the line of long sea-weeded ledges
where weeds hang to the simple blue from green.
Or does the land lean down to lift the sea from under,
drawing it unperturbed around itself?
Along the fine tan sandy shelf
is the land tugging at the sea from under?

The shadow of Newfoundland lies flat and still.
Labrador’s yellow, where the moony Eskimo
has oiled it. We can stroke these lovely bays,
under a glass as if they were expected to blossom,
or as if to provide a clean cage for invisible fish.
The names of seashore towns run out to sea,
the names of cities cross the neighboring mountains
-the printer here experiencing the same excitement
as when emotion too far exceeds its cause.
These peninsulas take the water between thumb and finger
like women feeling for the smoothness of yard-goods.

Mapped waters are more quiet than the land is,
lending the land their waves’ own conformation:
and Norway’s hare runs south in agitation,
profiles investigate the sea, where land is.
Are they assigned, or can the countries pick their colors?
-What suits the character or the native waters best.
Topography displays no favorites; North’s as near as West.
More delicate than the historians’ are the map-makers’ colors.

From North and South, Houghton Mifflin, 1946

I heard a story that you once spent a night in a tree at Vassar outside Cushing dormitory. Is it true?

Yes, it was me, me and a friend whose name I can’t remember. We really were crazy and those trees were wonderful to climb. I used to be a great tree climber. Oh, we probably gave up about three in the morning. How did that ever get around? I can’t imagine! We stopped being friends afterwards. Well, actually she had invited two boys from West Point for the weekend and I found myself stuck with this youth all in—[her hands draw an imagined cape and uniform in the air]—the dullest boy! I didn’t know what to say! I nearly went mad. I think I sort of dropped the friend at that point . . . I lived in a great big corner room on the top floor of Cushing and I apparently had registered a little late because I had a roommate whom I had never wanted to have. A strange girl named Constance. I remember her entire side of the room was furnished in Scottie dogs—pillows, pictures, engravings and photographs. And mine was rather bare. Except that I probably wasn’t a good roommate either, because I had a theory at that time that one should write down all one’s dreams. That that was the way to write poetry. So I kept a notebook of my dreams and thought if you ate a lot of awful cheese at bedtime you’d have interesting dreams. I went to Vassar with a pot about this big—it did have a cover!—of Roquefort cheese that I kept in the bottom of my bookcase . . . I think everyone’s given to eccentricities at that age. I’ve heard that at Oxford Auden slept with a revolver under his pillow.